Cascadia take the honours in an 8-1 win 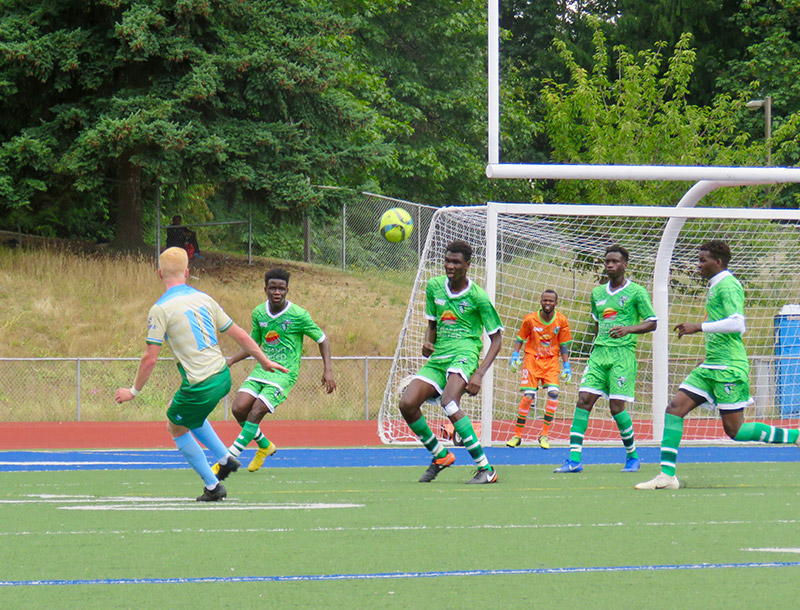 Cascadia ran out the resounding victors in their friendly against Darfur United on Saturday 27 July on a day to remember for players Hamza Haddadi and Tyler Bjork.

The duo both struck a hat-trick in the 8-1 victory, with Bjork’s treble coming in an impressive second-half display for the Evergreen Premier League’s all-time top scorer.

Cascadia started the game somewhat under the cosh but, having got their noses in front nine minutes in, they didn’t look back.

The opener came from Haddadi, who became the first Cascadia player to score on two different continents, following his goals in the CONIFA World Football Cup in London in 2018.

Beau Blanchard made it two with a calm finish a little later on. The hosts were beginning to exert their authority, with another couple of goals struck off for offside.

Haddadi eventually got his second, and Cascadia’s third, with a neatly taken penalty, before Scott Menzies unleashed a fine shot on the stroke of half time to make it 4-0.

Bjork scored moments into the second half to further extend the home side’s lead in the game, before Haddadi completed his hat-trick with a second from the penalty spot.

However, Darfur had had chances of their own in the game, and pulled one back when Khalid Abdulkhalik headed home from a corner.

Bjork was not to be denied his moment, though – and scored two more to complete his hat-trick and grab his share of the limelight with teammate Haddadi.

It continues Cascadia’s recent good run of goalscoring form and secured another impressive victory for the North American side.