Looking ahead to the CONIFA Sportsbet.io European Football Cup final… 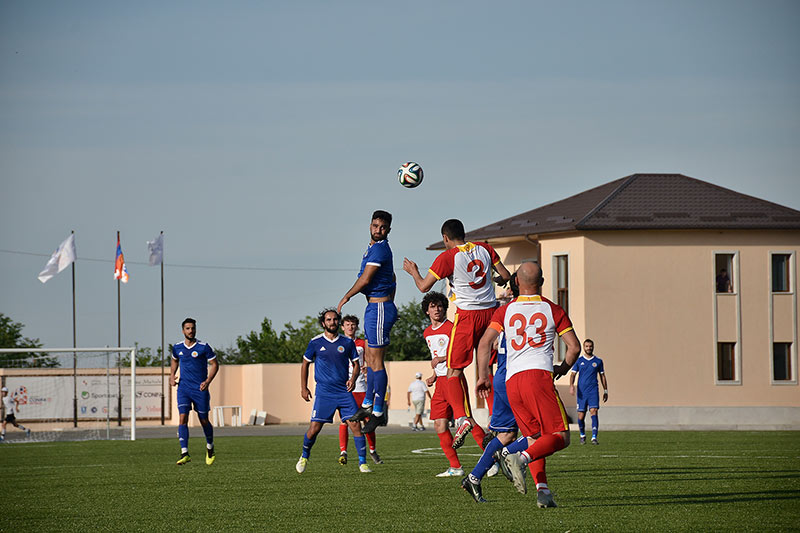 On Sunday 9 June, Artsakh gets set for the final of the CONIFA Sportsbet.io European Football Cup 2019. The final in Stepanakert will be played between Western Armenia and South Ossetia, a fixture which opened Group B games one week ago. Kick off is at 6pm.

The two finalists opened their respective tournaments against each other on the opening day of fixtures, with outsiders South Ossetia earning a narrow victory in Martuni.

With the President of Artsakh, Bako Sahakyan, in attendance, Badrat Gurtsiev broke the deadlock for South Ossetia with a powerful freekick which nestled into the corner via a deflection. The lively forward doubled the side’s lead early in the second half with a diving header from a looping cross to increase the cushion.

The Western Armenians came back strong, however, determined to salvage a result at the Avakyan Arena. They halved the deficit through David Azin as he latched onto a through ball and slotted it underneath the advancing South Ossetia goalkeeper to set up an exciting finish to the game.

Western Armenia threw men forward in the dying embers of the matvh, but South Ossetia saw out the victory as their 2019 European Football Cup campaign got off to a flying start.

The route to the final

Western Armenia – There was to be no hangover to their opening day 2-1 defeat to South Ossetia for the Western Armenians as they romped to a 5-0 victory over Szekely Land. The game, which had five different goal scorers, was crucial in Western Armenia’s qualification hopes from the group stages and seemed to really kick-start their tournament.

Western Armenia secured their semi-final spot on matchday three with a 1-1 draw with Padania, knocking the holders of the trophy out of the competition in the process. Artur Yedigaryan’s goal was enough to see Western Armenia progress to the knockout stages in what became a heated affair in Stepanakert.

In front of a big crowd and an electric atmosphere, Western Armenia secured their place in the final after beating Abkhazia on penalties. Going behind in the first half against the run of play to a Khugaev strike, the Western Armenians were handed a penalty to level the tie. Davit Manoyan stepped up and coolly placed his penalty into the right corner. The game was a tense affair for the remainder of the match, and neither side were able to muster many goal-scoring opportunities. It was to be decided on penalties. Abkhazia failed to score all three of their attempts whilst Western Armenia scored each of theirs, meaning they took the first position in the final.

South Ossetia – South Ossetia began their European Football Cup campaign with a 2-1 victory over Western Armenia. They followed this result with another impressive win over tournament favourites Padania, to put themselves firmly in the driving seat to top Group B.

On matchday three, South Ossetia dropped their first points of the tournament with a 2-2 draw with Szekely Land, but it was still enough to progress to the semi-finals. Badrat Gurtsiev notched his third and fourth goals of the European Football Cup as the side twice came from behind to earn a point and a place in the knockout stages.

Meeting Chameria in the semi-finals in Askeran, the match was a nail-biting affair. The goalless draw saw the game go all the way to penalties after 90 minutes, and even still the two sides continued to match each other. After 14 penalties – including an audacious ‘Panenka’ from Chameria’s Marco Van Basten Cema – South Ossetia eventually claimed the second place in the final alongside Western Armenia after Boci Xhorxhian missed the decisive spot kick.

Gevorg Kasparov (Goalkeeper) – A consistent performer in the group stages, and a hero in the semi-final penalty shootout against Abkhazia. Kasparov has only picked the ball out of his net four times this tournament – and that’s including every penalty he has faced in the competition so far.

If the goalkeeper can continue this inspired form he could become a crucial part of Western Armenia’s chances in the final on Sunday. Saving twice in the shootout against Abkhazia, if the match is to go all the way to penalties, the stopper’s heroics could prove to be the difference in Stepanakert.

Badrat Gurtsiev (Winger) – Gurtsiev has found the net five times so far this tournament and has troubled defences from the opening minutes of the European Football Cup. The lively winger is versatile, with two of his goals coming from headers as the forward became one to watch in Artsakh.

Gurtsiev has also found the net against Western Armenia twice already, with a brace against Sunday’s opponents on the opening day. It could be an interesting battle between Kasparov in the Western Armenia goal as the two star players go head-to-head.