CONIFA History Made with First Ever Match with Kernow FA 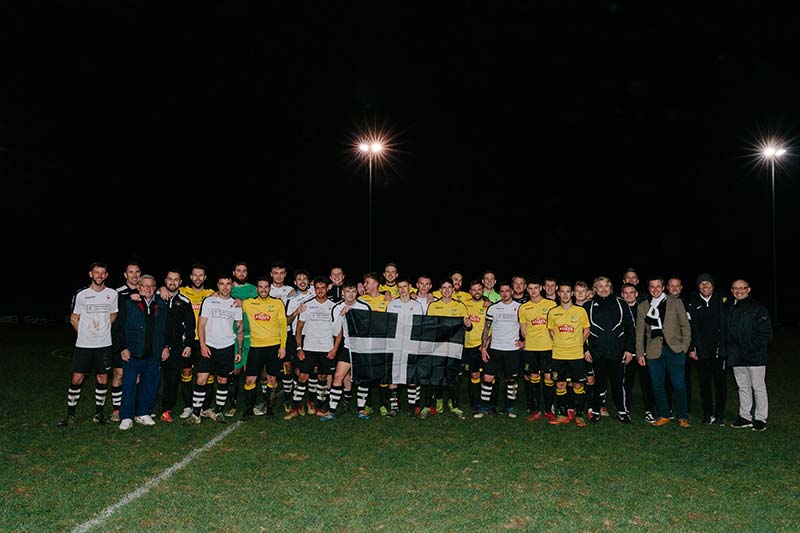 NEARLY 200 spectators witnessed a celebration of Cornish sport on the evening of February 25th as the Kernow Football Alliance won their inaugural game against a Foxhole Stars XI, 3-2.

Goals from Harry Clarke, Olly Brokenshire and Liam Eddy put Kernow into a three-goal lead, before strikes from Dan Jennings and Harry Downing brought Foxhole back into the game late on.

The fixture, played at AFC St Austell’s Poltair Park, was Kernow FA’s first since they were officially ratified at CONIFA’s AGM in Warsaw last month.

Their inclusion provides a platform for 11 million Cornish people around the world to be represented on the international football stage.

A strong Kernow team, consisting of players from four South West Peninsula League clubs, were led out onto the field by joint-managers Darren Gilbert and Phil Lafferty to take on a challenging opponent, put together by Foxhole Stars’ Lee Whetter and Shaun German.

Having posed for photographs with the St Piran’s Flag, both teams were quick out of the blocks with possession shared until Kernow nudged themselves in front when Clarke lifted the ball over goalkeeper Anton Lake shortly before the half hour mark – with the large crowd rightly standing to applaud and recognise a moment of Cornish football history.

At the other end, Kernow goalkeeper Jason Chapman had to be on his toes to keep out Jennings and maintain his side’s narrow lead at the break.

With the two teams catching their breath in the changing room, following an all-action first 45 minutes, Kernow FA chairman Jason Heaton and director of football Andrew Bragg took to the pitch to thank benefactor, Jim Rayner.

Jim was guest of honour on Monday evening, having embarked on a 500 mile round trip to watch Kernow and humble the Alliance with a donation of £250.

As the football got back underway, it wasn’t long before Kernow doubled their lead, with Brokenshire cooly slotting home from the penalty spot after Eddy was brought down by Lake with 50 on the clock. Just six minutes later it was 3-0, with Eddy finding the net from close range.

Chances were aplenty – with roll on, roll off substitutions used to ensure everyone received playing time – and Foxhole soon got themselves on the board, with Jennings beating Kernow ‘keeper Barrie Wyatt from 12 yards after team-mate Carl Rickard was tripped inside the box on 70 minutes.

The Foxhole team – made up of players from across the South West Peninsula, East Cornwall and Duchy Leagues – pulled another goal back just four minutes later as Downing got his head to the ball following a scramble inside the box.

Both teams attempted to carve out further goals but 3-2 is how it remained, with both sets of players cheered off at the end of the 90 minutes, having completed a major step in Kernow’s new journey.