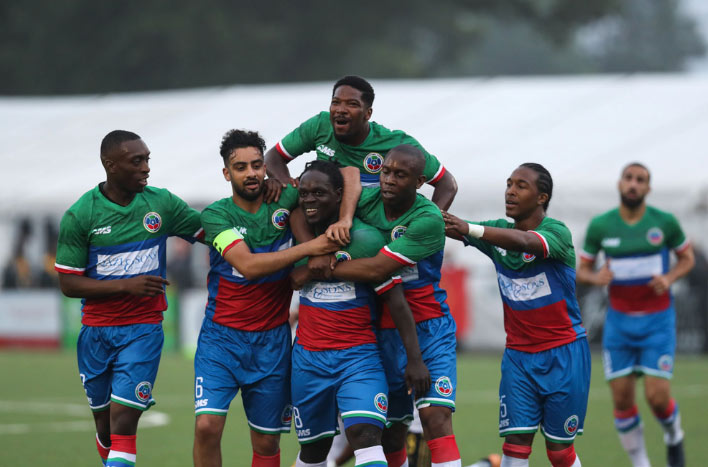 As part of our series for Refugee Week 2019, we speak to Haji Munye, who is head of the Barawa FA, about his life in England, CONIFA, and one day going back to Barawa…

Tell us about Barawa and what it’s like there? What would visitors expect to discover if they went to visit?
At this moment, it’s a difficult time in Barawa, as it is  a semi-occupied by Al-Shabaab, the terrorist organisation and they control a lot of the land around the south-east of Barawa. They have imposed a strict Islamic Sharia law, but the government has also been working hard to try and get them out of there.
In terms of the country itself, though, it’s on the coast and is a beautiful place where the sand and sea are just amazing.

So when did your family and yourself leave Barawa? How did you come to the UK?
When the civil war began in Somalia, I was a little baby at that time. We had to find safety for the family and we escaped from the coast to get a small boat to Mombasa in Kenya. It was an incredibly tough trip as we went on a boat through the night. From there, we stayed with a family member for a short while and then came to England as asylum seekers. We were settled here full time in 1992 and it has been home for us ever since.

Are your family here with you? Or are they still in Barawa?
There are a lot of my family here, and many still back in Barawa, but also we are spread far and wide around the world, with family in America, Australia, Germany and Switzerland.

Does listening to other people talking about Barawa make you want to know more about it?
The family speak a lot about Barawa. My granddad married to an Italian woman who is a historian and she wrote a book about the 800 years of history of the country. I sat down to listen to her and she said it’s the best place she’s been to in the world.
They got married in Mogadishu and she was amazed, and said it was an unbelievable place. Barawa had and still has a real sense of community. The people from Barawa are educated and more forward than other places, and in the past, it was a very liberal place and not as religious, and they enjoyed a strong social life.

What do they miss the most about their homeland?
They mainly miss being there as part of a peaceful, engaged community. You can get straight onto the beach and the scenery is fantastic. They have great links to the Portuguese, Italians and Chinese, so it has a real multicultural feel to it.
I think sometimes people don’t realise how others suffer when they’re taken away from home and taken from their real community. There are a lot of elders in this country who find it tough, because they had to flee their homes and their communities and come here, and they can be afraid of the system and the way things work here.
That said, everyone is grateful to England and how it’s welcomed us into the community here – we’ve been given the opportunity for a good education and employment opportunities and it’s given me a path to my role to be a PE teacher today.

Do you feel as though you’re British or do still retain your heritage now?
For me, when people ask me where I am from, I say I am Barawain, but I guess you could say I am a British-Barawain or Barawain-British!

I love my heritage, although everything I have learned has been in the UK, so it’s allowed me to mix my culture and benefit from both.
I have a lot of British friends and my life is here, but would love to go back home and be a part of the rehabilitation and rebuilding process for the country when the time is right.

Is there a strong Barawa community in the UK?
There are not many of us across the UK, but there are around a million who find themselves in different part of the world. We are a very peaceful people, but the football team has given us a means to make some noise!

What’s your one main dream of the future – your one hope?
I want to host a World Football Cup in Barawa at some point.

What has football helped you achieve outside and inside Barawa?
It has given me something to fall in love with, football has been my everything since I was young. I didn’t have a really good childhood, so my way out was always to play football.
I had a good youth career, and represented England at U16s and so football was a big thing to me. For my family, England has been a saviour to them, and football has given that same hope to me. Football has saved me and now I am a PE teacher because of it.

What has being a member of CONIFA given to the Barawa FA?
It has given us a platform that no one could have thought was possible. We are so grateful for that opportunity.
I have to give great praise to Sascha Düerkop, Kieran Pender and Paul Watson, who have been amazing. They are unbelievable human beings who put others first and stand up for injustice. Without them, we wouldn’t have had as much hope.
CONIFA has given us that opportunity, and we hope that one day we can also find peace in Barawa.

Hope on the horizon for Kiribati and Tuvalu
March 20, 2020