6 conclusions from the final day of the CONIFA Sportsbet.io European Football Cup 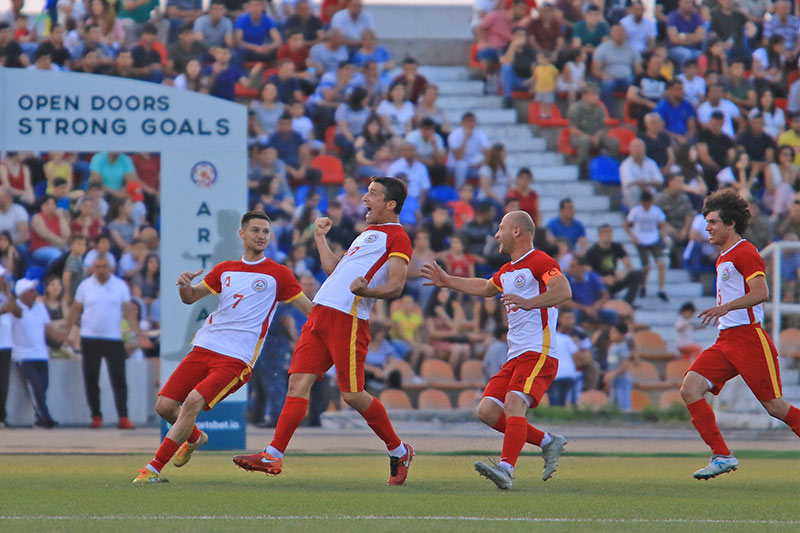 Wow! We couldn’t have asked for a more remarkable conclusion to the tournament. A chance for crowd favourites Western Armenia to take the final to penalties with the last kick of the game, only for a heroic double save by Muharbeg Buraev to give South Ossetia the title. Penalties have been a theme of this year’s European Football Cup, with both semi-finals and the third-place playoff already having been decided on spot kicks. Suddenly it looked like the final was destined to go the same way, until Buraev sent shockwaves around Stepanakert.

The ball hitting the back of the net from a superb 35-yard free kick is a worthy way to win any football match. It’s not very often that the ball hits the back of the net – then carries on going though! That’s exactly what happened to Ibragim Bazaev’s thunderbolt in the 65th minute. The forward somehow managed to hit a section of the netting which was stretched enough that the ball could squeeze through, barely ruffling it and sparking prolonged confusion in the stadium and amongst Western Armenian players and staff. Referee Dmitrii Zhukov and his assistants were on the ball though, and rightly gave the goal.

The crowds in Artsakh were truly exceptional, filling up the Stepanakert Stadium on several occasions, and creating a wonderful buzz around the games in the smaller towns of Askeran, Martakert and Martuni. Was it really necessary to bring back the dreaded vuvuzela for the tournament though? The monotonous horns which plagued the football world in 2010 and were then banned by a string of sporting organisations somehow found their way to Artsakh to make matchgoers’ eardrums ache. The fans were still amazing though!

Neither of the finalists were particularly fancied for the title this year, with former CONIFA tournament champions Padania and Abkhazia in the mix, and the weight of Artsakh behind their home team. However, they showed in the final why they are now key players in CONIFA football, with solid, disciplined performances and occasional flashes of real quality. The heat and relentless schedule in Artsakh didn’t lend itself to a pressing game or nonstop end-to-end football, and these two sides showed their ability to manage games and be ruthless when required. They will be big scalps in any future tournaments they enter.

Although it was his strike partner Bazaev who scored the winner in the final, tournament top-scorer Gurtsiev was the standout player in Artsakh. The strike duo proved to be the perfect foil for each other, scoring all of South Ossetia’s 7 goals (compared to Western Armenia’s 8 from 7 different scorers). FC Chaica forward Gurtsiev’s clever runs and his gem of a left foot made him a handful for every defender he came up against, and a worthy winner of the Sportsbet.io award for Player of the Tournament.

After the wonderfully wacky closing ceremony, with volunteers waving flares out of Ladas being driven around the pitch and Voices of Artsakh performing their earworm anthem one last time, some of the key organisers gathered in the Stepanakert media centre for a final press conference.

Grigori Martirosyan, State Minister of the Republic of Artsakh was quick to congratulate the champions, but also praised the CONIFA rule of awarding medals and trophies to everyone. “All teams are winners,” he said. “We have enjoyed 9 unforgettable days, and it is with some sadness that it has come to an end.” Martirosyan noted the average of over three goals per game, and the absence of any disruptive incidents or accidents during the tournament. His Artsakh government colleague Narine Aghabalyan, the Minister of Education, Science and Sport, also thanked the 1,000 or so people involved in making the tournament a reality.

CONIFA General Secretary, Sascha Düerkop, was glowing in his appraisal of the tournament, picking out the multitude of smiling volunteers as the unsung heroes of the competition. Title sponsors Sportsbet.io were represented at the conference by Lucy Thomas, PR & Sponsorship Manager, and Justin Le Broque, Head of Sportsbook Marketing. Le Broque said they had been “blown away” by the event, and that it had set the bar for future CONIFA tournaments. “Thanks for welcoming us into your family,” Thomas said. “Our campaign for the tournament was ‘Defy the Odds’ and every story we have heard has lived up to that.”

Smiles all round, and time for a well-earned rest for those who spent months bringing the CONIFA Sportsbet.io European Football Cup to life.