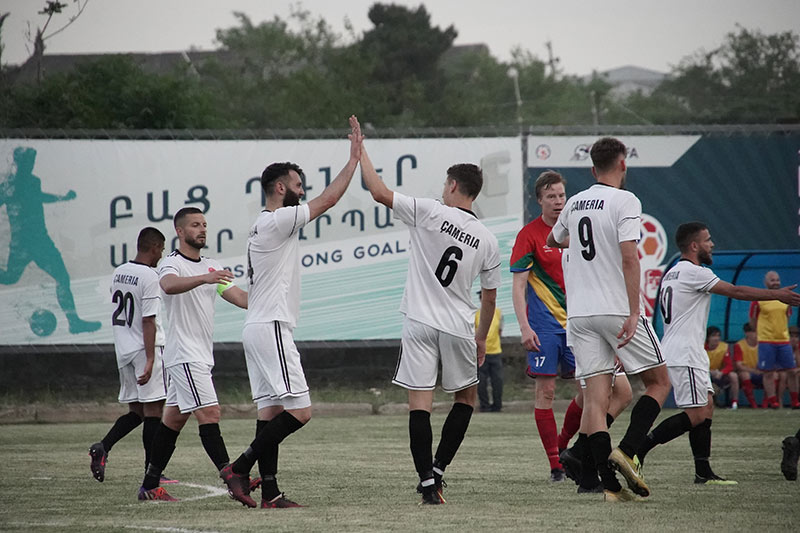 Click the links below or scroll down to view the Day 3 Match Reports:

In the last game of their group, South Ossetia faced Szekely Land at Askeran. The sides were in two very different places; South Ossetia needed to win to secure a place in the semi finals; Szekely Land, after losing the first two games, only now have the placement matches to look forward to. The team, which hasn’t scored a single goal so far in the tournament, and has shipped 9, was looking to finish the European Football Cup 2019 with a win.

In the first moments, South Ossetia took control of the game but it was Szekley Land who got close to opening the scoring: in the 20th minute, Balint collected a ball at the edge of the area, but his shot went inches wide. Five minutes later, South Ossetia get close to breaking the deadlock. The Szekely Land keeper failed to collect an easy cross, and the ball landed at Beteev’s feet… who incredibly misses the target.

On the counter, Szkely Land almost made it 1-0 – but the ball was saved on the line. And the first half finished with a shot from long range by Djudjoev, which ends up a few inches away from the goal, leaving the match poised at 0-0.

Only seven minutes after the second half begins, and Szekely Land score. Right back Ghinea dribbles past three South Ossetia players before delivering the ball into the area. Vekas receives the ball and shoots: 1-0 for Szekely Land.

The response from South Ossetia arrived in the 63rd minute. A shot deflected becames an assist for Beteev. The striker incredibly misses the target, and the ball flies over the crossbar. Two minutes later, Szekely Land had two big chances to double the lead. First the volley shot from Benko-Biro hits the crossbar, and one minute later, the South Ossetia keeper is called on to make a miracle save on a shot from inside the box.

With 72 minutes on the clock, South Ossetia finally gets the equaliser. A cross comes in from the right which finds Gurtsiev; his header is precise enough to beat the keeper and level the score.

The goal enlivens South Ossetia, which creates a couple of chances but the players are not able to convert them. Surprisingly, Szekely Land go ahead again. On a counter attack, the men in blue attack, the keeper saves – but Kovacs is able to tap it in. The team’s 2-1 lead lasts only a matter of seconds as Gurtsiev finds himself in front of the keeper and makes it 2-2 in the 83rd minute.

The final minutes of the game saw both sides trying to find the winner. But it’s not enough; the match ends 2-2.

Chameria earned themselves a place in the knockout stages after a comfortable win over Sapmi. First half goals from Vilson Anzim and a brace from lively forward Edmond Hoxha saw the side comfortably progress to the finals.

It was in the opening minutes when Chameria opened the scoring. A swift attack saw the ball fall kindly to Anzim in the Sapmi area, who turned his effort into the bottom corner. This set the tempo for the Chameria side who controlled the first half.

Moving the ball quickly around the Martakert pitch, Chameria continued to press. Their patience was rewarded midway through the first half as Hoxha grabbed his first of the afternoon. The forward fired home after being left unmarked in the area at the back post.

The stop in play also signalled the first drinks break of the afternoon, as the humidity soon sapped the energy of both sides as the game went on. Chameria grabbed their third on the stroke of half time, with the impressive Hoxha causing all sorts of problems for the Sapmi defence. He rolled the ball under the Sapmi goalkeeper after being played through one-on-one.

Sapmi grew into the game in the second half with youngster Johan Ante Eira having the best opportunity to grab his side’s first goal of the competition. He rounded the keeper but blazed over with the goal gaping.

Sapmi rued their missed opportunity as 10 minutes from time Marko Van Basten Cema put the game beyond doubt after coolly finishing one-on-one for Chameria’s fourth of the afternoon.

Hosts Artsakh were eliminated from the tournament by a robust Abkhazia side after failing to capitalise on a dominant second half in front of a passionate crowd in Martuni.

Artsakh needed a strong result to qualify, and they started the game full of intent – particularly their surprisingly nimble winger, the stocky Marat Karapetyan, who made his presence felt on a series of marauding runs. He was nearly the game’s first casualty, however, clattering Dgbuadze to the ground and earning a yellow card for his troubles.

The well-drilled and strong Abkhazia side proved too much for Arstakh in the game’s early stages, with the potent winger Shabat Logua dominating the left flank and the robust defence smothering Artsakh’s attempts to counter.

This paid off after just 10 minutes when Logua – always deadly cutting inside – scored with a low shot past the Artsakh keeper.

Despite the best efforts of the home crowd, Artsakh were playing with increasing desperation, becoming ill-disciplined on the ball. Norik Mkrtchyan, playing in his home town in front of his own parents, made a clumsy run into the box, and responded with an even clumsier challenge on the man who stole the ball away.

Once Artsakh calmed down, they seized the momentum. Latching onto a ball played on the counter, Mkrtchyan sent a powerful shot ricocheting off the inside post and into the net – an equaliser that delighted his hometown crowd.

Artsakh closed the half high on confidence, dented only slightly when Abkhazia’s Malyaka, given a clear run on goal, seemed to have restored their lead – unfortunately for the visitors, he was well offside.

The hosts started the second half on the front foot, with fine interplay between Karapetayan and Mayriyan creating a constant threat in the Abkhazian half. However, Artsakh dithered in the middle of the field too often, and Abkhazia’s robust defenders soaked up most of their attempts to build through the centre.

Despite constant pressure – Abkhazia had few attempts in the second half – Artsakh were unable to conjure up an equaliser, and even the best efforts of Martuni’s favourite son weren’t enough to prevent Abkhazia from eliminating Artsakh from the group.
Match report

Western Armenia progressed to the semi-finals of the CONIFA Sportsbet.io European Football Cup after a 1-1 draw with Padania, which sends the holders out of the competition at the group stage.

This much-anticipated Group B encounter in Stepanakert was tantalisingly poised, with both sides level on points and goal difference heading into the fixture. Padania knew they needed a win to progress, whilst Western Armenia needed only a draw, courtesy of their superior number of goals scored.

The first half was one of few clear-cut chances, with speculative shots from distance representing the majority of both sides’ attempts on goal. Tempers were beginning to fray between the sides, with three yellow cards awarded as both sets of players struggled to find an early breakthrough.

Western Armenia had the best opportunities, with Raffi Kaya blazing over from an inviting free kick delivery, and an incredible double save by Federico Delfrate in the Padania goal after Arman Aslanyan’s cross caused all sorts of problems.

The crowd favourites stepped up the pressure early in the second half with Aslanyan scuffing his shot from point blank range, with the goal at his mercy. Delfrate also made another wonder save from a Davit Hovsepyan header which was destined for the top corner.

With the score still locked at 0-0 midway through the second period, the match exploded into life. First, Artur Yedigaryan crashed in a powerful strike from the edge of the box to put Western Armenia in front. Less than a minute later, Padania went up the other end of the pitch and got back on terms immediately. Nicolo Colombo headed home from close range to make for a nail-biting conclusion.

Padania piled bodies forward in search of a winner but couldn’t find a way past Gevorg Kasparov. The Western Armenia keeper produced a superb save from Alessandro Moretti. Western Armenia failed to capitalise on several counter attacks, but in the end the point was enough to take them through to the knockout phase. And Padania will take their place in the placement games of the tournament for the first time ever, having won the two previous European Football Cups.