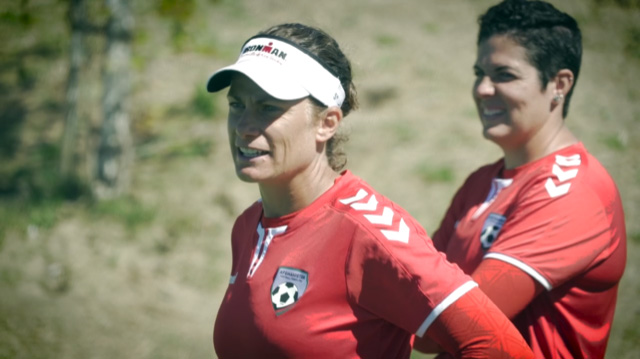 “We became a group of women with a purpose, a vision, a mission”

Welcome to the second of three parts in our Q&A series with CONIFA’s brand-new Director of Women’s Football, Kelly Lindsey. Here, Kelly tells us how she ended up with the Afghanistan women’s national team – and what her biggest challenges have been in that role…

CONIFA: What’s been your proudest achievement as both a player – and as a coach?

Kelly Lindsey: “The first time I wore the USA women’s national team jersey was a moment I will never forget. The national anthem brought me to tears that day. I was a player who endured 10 knee surgeries in 10 years, all at the prime of my career, and thus my playing days were cut short. As I stood there in the locker room, seeing my name on the USA kit, it brought back all the memories of the many trials and tribulations I’d endured to wear the jersey; waking up from surgery wondering if I would ever walk again; the pain, the agony, the low moments, the first steps, the first run, training alone in the snow, getting up before school to run, extra training and touches before basketball practice, hours banging the ball against the wall and the couch… anything to get myself back to peak fitness and into the next training camp.

“The rise and fall of training so hard to get back into camp and start preparing for the next event, to the phone calls to my national team coaches to inform them I was in need of another operation on my knee… To have overcome so many obstacles to put that jersey on and play for my country was a memory I will never forget.

“As a coach, there are many moments, but one that really hits me was our 2016 South Asian Football Federation (SAFF) Championship journey with the Afghanistan women’s national team. We had brought a team together for the first time to India. We had a few days of training and then played against India and Bangladesh, two powerhouse teams in south Asia, who have a committed national team training schedule. India were champions in 2010, 2012, 2014 and then in 2016, and Bangladesh were runners-up in 2016. We were a team coming together for the first time, learning each other’s names, speaking six or seven different languages…

“I remember the post-game press conference and the emotions overwhelmed me. We played hard enough and competitively enough that this team from Afghanistan was being asked questions about football development and future aspirations. That’s significant, because this was a team that was often looked at as a charity case, and these were women united enough and competed hard enough to be asked questions about future World Cup dreams. They were seen as a football team!

“These women aspired to be the pride of the country, and they were on the right path, they had earned the respect to be seen as equals in the football community.”

C: How did you end up coaching and working with the Afghanistan women’s team?

KL: “In 2015, I was coaching at the Julie Foudy Sports Leadership Academy, and a young woman from the Afghanistan women’s national team was my assistant coach. I heard about the challenges and struggles of the programme, and knew I wanted to help the team. I never imagined coaching them, I was trying to help host a training camp for them, where they could play in a safe environment, enjoy some friendly matches, connect with other young women playing football, and start to connect football with positivity. I wanted to organise some women’s leadership workshops to help support their development as both people and players.

“I worked with the Afghanistan Football Federation to organise and fund the training camp, but after months of working on the project, the federation just disappeared.

“A few months later, I got a call from Khalida Popal, as she was taking over the Afghanistan team as Program Director, and wanted to revisit the training-camp idea. We talked details and how to really help develop the team now and in the future. After some time, she came back and noted they had a goal this year to compete in the SAFF Championships… would I be willing to take on the challenge of coaching and helping build the new Afghanistan women’s national team?

“So we started on the journey together, building a professional staff who would volunteer their time and energy to build the foundation for these women to pursue their goals and dreams.”

C: What was the No1 factor for you deciding to take that particular role?

KL: “Our women have a champion spirit about them. I believe that anyone who has gone through the challenges these women have faced has an innate champion within them. I wanted to give them a professional environment that respected them as equals, gave them a voice, and provided the place and space to pursue their dreams. I wanted to teach them how to train and pursue their goals on and off the field, and provide them the environment to be their best and achieve their ultimate goal, which is ‘to bring pride to Afghanistan’.

“Beyond the pitch, we worked to build a leadership committee, and aimed to teach the women how to lead themselves. How to take ownership for their development and for the future of the programme.

“I knew from the moment I took that job that an outsider would never be the leader Afghanistan needed to unite the country and be the pride of the nation. They needed a woman from within the programme to rise through the ranks and take the reins. I was very honest with the team that my proudest moment would be when I was old and grey, watching the World Cup, and they were leading themselves on to the pitch. So we worked to help the players get their coaching certificates and start the journey to be the leaders the country needs.

“I took the job to help build the infrastructure and assist the next leaders who would take Afghanistan women’s football to the heights these women dreamed of.”

C: What’s been your biggest challenge during your time working with the Afghanistan team?

KL: “What hasn’t been a challenge is probably an easier question! The biggest challenge has been the inconsistent support of the Afghanistan Football Federation. Every time we ‘succeeded’ and did well on the world stage, they found a reason to shut us down. They treated the women’s team as a ‘check-the-box activity’ to earn FIFA funding and really did not support the team when the team excelled and earned global respect.

“Our staff acted as a federation within the federation. We put a development plan together, fundraised as a staff, co-ordinated and negotiated with other federations to support training camps for the team. Ultimately, the federation would not fully support these efforts, inhibiting the development and growth of the women’s team, year in and year out. One camp a year is not development, it’s just ticking that box. It was heartbreaking for the players, because they just wanted to train, play, and compete for their nation. The players have the best intentions to truly bring pride to the nation – and to have a federation stand in their way is disheartening to say the least. AFF’s lack of investment ensured the women were not competing consistently – and thus halting their development at a time when we were rising and competing well on the world stage.”

C: And what’s been the best thing to happen in the job – either on or off the pitch?

KL: “Afghanistan is a country of people who struggle to trust. In a war-torn country, you never know who is on which side, who you can believe, and who you can trust. You recognise it right away when you start working with the team. A group of women who have had many people come through and ‘help’ them – but these people come and go, and not much has changed.

“When we arrived as American coaches, we all had to learn to stand together. I remember our first meeting when I asked the team, ‘why are we here?’ and ‘What is our mission?’

“What came out of that meeting was the start of something so beautiful. We became a group of women with a purpose, a vision, a mission. Over the years, when the challenges were real and were hard, we always came back to this mission and united around it to take our next steps. We became a team, a family, and we are still growing as a family – together, piece by piece. We are Afghanistan and I am extremely proud of that.”

We’ll have the final part of our Q&A live tomorrow – so be sure to come back to find out about Kelly’s new role in CONIFA, and what her aims for women’s football are. Don’t miss it!