CONIFA are supporting Rohingya FC, who need assistance with equipment, kit and so much more. Find out how you can help the Malaysia-based refugee team here… 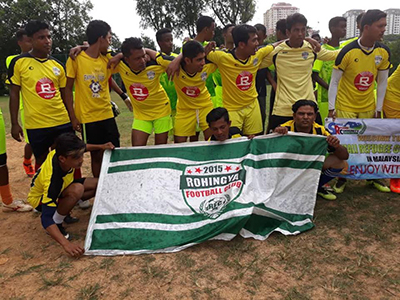 The Rohingya people, described as ‘the world’s most persecuted people’ by the United Nations, have their own football team – Rohingya FC – based in their asylum city of Kuala Lumpur. Founded in 2015, and a member of CONIFA, the team aims to give a voice to Rohingya people who have fled from Myanmar, their home country, and to support and promote a message of peace and harmony across the globe.

Because Rohingyans cannot hold bank accounts, or even work, the team struggles to fund itself, and so CONIFA has stepped in to assist the team in its work.

CONIFA’s Asia President has set up a Go Fund Me page where you can donate directly to the fund for Rohingya FC. The money raised for them will be used to purchase and deliver kit directly to the team, as well as set up training events and tournaments. Go here to donate.

Fancy yourself as the new Podolski, Drogba or Kante? If so, you can bid on a place in the CONIFA All-stars football team – and play in the CONIFA Challenger Cup. The tournament takes place in the Cologne region on 1-3 March 2019, and if you’re one of the successful bidders, you’ll also get to keep your team jersey as a memento of the day, and have dinner with the CONIFA team too. It’s a once-in-a-lifetime opportunity, so if you’d like to show off your Cruyff turns or your Panenka penalty kick, you can bid (or buy your place outright) on eBay here or you can buy your place on the team outright for €250! Get in touch via CONIFA’s Facebook page to find out more.

All money raised from the auction will go to the Rohingya FC appeal; bids start at €100.

Taking place in Nagorno-Karabakh in June 2019, the CONIFA European Football Cup promises to be a true footballing spectacle. There will be just four VIP, access-all-areas passes for sale to the public for the tournament; for just €200 each, you will be allowed in to as many matches as you can watch, plus be allowed to go wherever you like within the stadium (the referees’ room, dressing rooms, and other areas at the discretion of the stadiums’ staff aren’t included in this). You’ll be able to check out CONIFA’s top European teams at close quarters, and enjoy a footballing feast to remember. Tickets will be on sale soon, so check back regularly for updates, but if you would like to register your interest in advance, get in touch with CONIFA via its Facebook page. All money raised from the VIP tickets will go directly to Rohingya FC.

4/ Go on to eBay; buy some unique football memorabilia

If you love your football, then keep a close eye on the CONIFA eBay auction page. This is regularly updated with football memorabilia (right now, it is auctioning off match-prepared jerseys, World Cup 2006 flags and more!) and all money raised from the auctions will go to Rohingya FC.

So what are you waiting for? Thank you for your support – all money raised will be gratefully received by the Rohingya FC team.